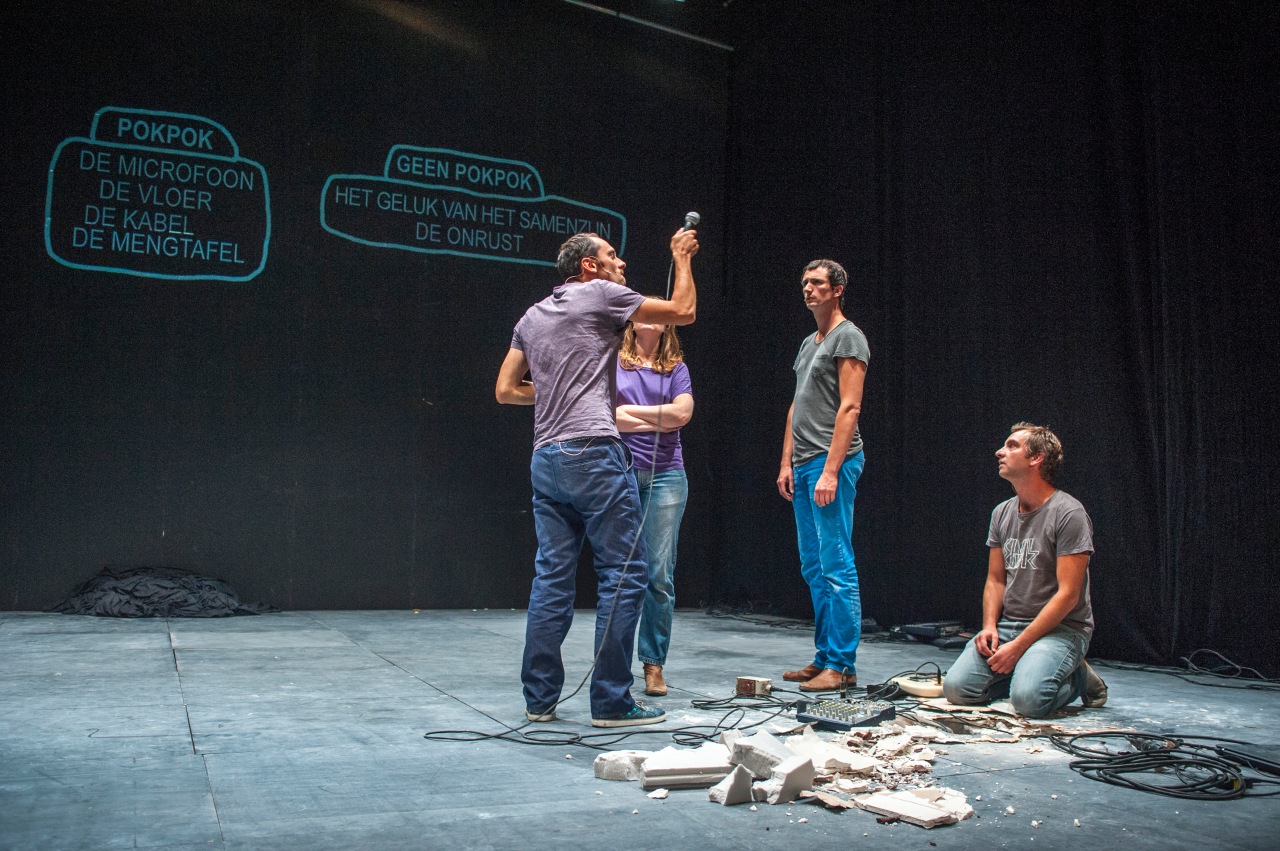 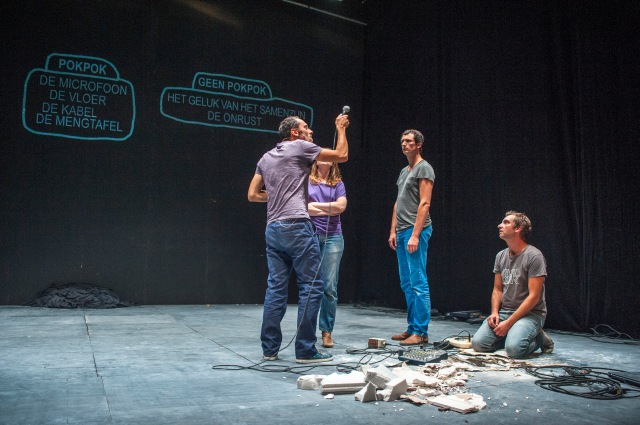 In the beginning there was darkness – black – but for a pool of dim light in the middle of the stage. Germinal is a creation story for the theatre. Slowly, lights come up on some dim shapes on stage: performers Halory Goerger, Arnaud Boulogne, Ondine Cloez and Denis Robert. Each is concentrating on a handheld computer, connected with a long wire to the wall of the black box they inhabit.

As tall, thin Halory strolls around the stage, stroking a key on his keyboard, his thoughts take shape in white letters beamed from a surtitle panel high on the back wall. In a Eureka moment, he draws Ondine to his discovery: thoughts transferred with the click of a key. Ondine’s thoughts are manifest on a second surtitle panel. They beckon to the other two – a sulky Arnaud and insular Denis —  to join them. Soon words, whole sentences are flashing on and off at the speed of dialogue, as the characters begin erecting the structure of a play, starting with a system of communication.

If Jacques Derrida ever gave a lecture in the form of a song and dance show, it might have looked something like Germinal.

After all this intellectual to-ing and fro-ing, Ondine literally chews up the scenery. Approaching a section of the stage with a pick-axe, she begins to tear it up, creating a hole and a pile of rubble. Arnaud pulls a microphone out of the hole and becomes the mouthpiece for more exchanges, each character now speaking French, but with their words displayed in English. The microphone sound “poc poc” becomes a system for categorization: items and concepts are listed under “poc poc” and “non poc poc”. A laptop from the hole gives the world according to Windows: a menu allows a projection of a hill, a mountain, a swamp on the back wall. The scenery is described as an overlay on top of the wall.

Voices are raised – the letters grow bigger – and then comes choral singing.  Voila! Opera. Germinal manages to be at once highly cerebral and physically, noisily concrete, thought-provoking and laugh-out-loud funny. The production, thanks to a combination of advanced electronic effects and an old-school piece of stage trickery, is dazzling. But nothing happens.

Nothing except for a long, joint effort to describe a series of events occurring in space over time – the objects, the action and duration reduced to a chronological graph that marches across the back wall as words writing themselves on a blackboard.

Timing in theatre is everything: this show has bits we’ve never seen before. Without a trace of artificiality, four performers and almost as many lighting technicians mount a play that is a philosophical argument to totally captivate an unsuspecting audience.