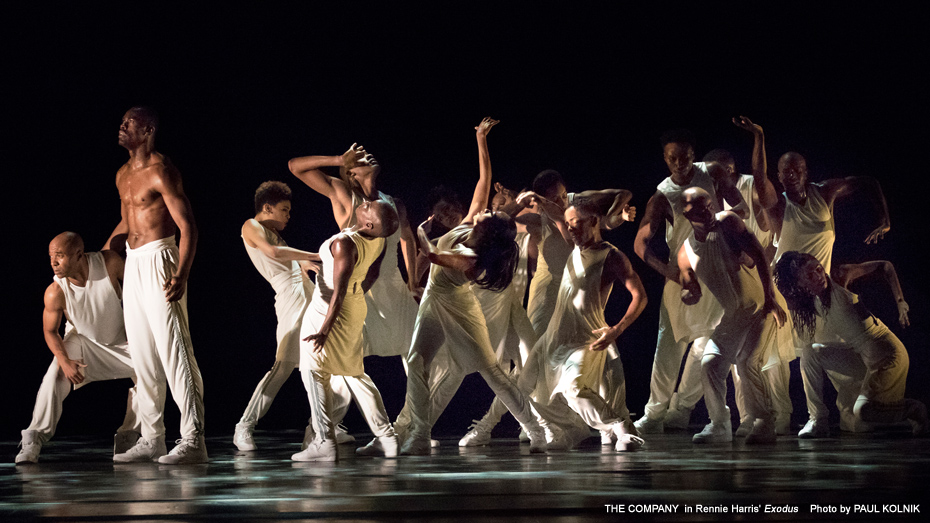 The standing ovations began after the first number on Friday’s opening show of the Alvin Ailey American Dance Theater.  It was “Toccata,” an excerpt from Talley Beatty’s Come and Get the Beauty of It Hot, first performed in 1964 by Ailey’s then fledgling company.

The dance for 16 men and women affirmed at once the continuity of the Ailey tradition and the injection of new vigor and talent that came with the 2011 appointment of long-time Ailey choreographer Robert Battle as artistic director.

“Toccata” is an occasion to show off the classic lines and the high-energy amalgam of ballet, modern and jazz dance as the dancers, costumed in white sleeveless tops, swept the stage in rows or pairs or trios to the music of Dizzie Gillespie. That little insouciant kick that sets a pivot in motion or the wag of a hand in the midst of a long, fluid arm extension are elements of the sassiness that accompanies the Ailey form. These dancers, young and new as well veterans of the company, were like the melodic line to a drum solo in the midst of the piece.

Yannick Lebrun’s achingly expressive solo in Ailey’s Love Songs from 1972 similarly brought to the fore the highly versatile, athletic nature of the Ailey-trained dancer. Lebrun performed the songs, in descending order of sadness, from “A Song for You” to “He Ain’t Heavy He’s My Brother” to Nina Simone singing “Poppies,” as if they were written in his bones.

Without doubt the biggest impact of the evening came from Exodus, a 2015 hip-hop based piece for 16 dancers choreographed by Puremovement originator Rennie Harris. This extraordinary work set to sounds and music composed by Raphael Xavier, follows in a line of African American expression that began with Alvin Ailey’s 1960 dance Revelations (performed Saturday at 2 pm), which was set to spirituals and gospel music.

A giant of a Moses-like figure, Jeroboam Bozeman could be said to be the lead dancer, in a crowd of fleet-footed dancers that seemed to multiply before our eyes. Clearly aligned to the politics of Black Lives Matter, Exodus is a transformative celebration of spirit and solidarity. Dressed in street clothes and brightly coloured running shoes at the outset, the troupe somehow rearranged itself as a kind of chorus in white tunics and formed a united force near the end, when a gunshot rings out. But hope rather than defeat was the takeaway.

Even more than his distinguished predecessor Judith Jamison, Robert Battle has brought a range of dance creators under the Ailey umbrella. The closing dance, Open Door, was choreographed by Ronald K. Brown, artistic director of Evidence. This piece displays the breadth of abilities in the company and was performed by 10 dancers including veterans Linda Celeste Sims, Matthew Rushing and Glenn Allen Sims. The women wear long dresses, all the better to display their quick shifts from something African-based, leading with the elbows  and buttocks, to Graham-esque modern to partnering their men in salsa steps — in a seamless flow of the joy that is dance at its best.

Photo of Exodus by Paul Kolnik