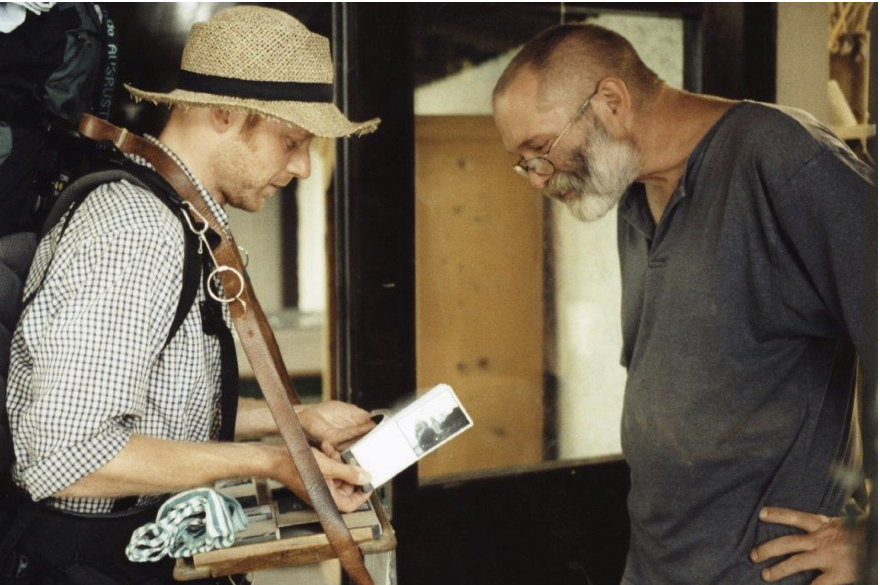 As viewers take their seats, Volker Gerling lurks in the shadows near the stage, where a podium with an overhead projector is prepared for his performance, a woman’s face already projected on the screen. This is a photographer, one thinks; he must be closely observing us all – are we potential subjects for his latest wanderings?

Gerling is more than a man with a camera; he’s a flâneur, that poetry-inclined stroller whose observations transcend external reality and become a work of art. It all began, he tells us in rather stilted English, with his purchase of a camera that snaps a series of photos in 12 seconds for processing into a flipbook. He experimented with a friend, a young woman in a red coat with lots of curly hair, whom he instructed to walk between two trees and hide behind them. The shoot was a failure, but out of that came the concept of the dropbook: Gerling flops down under the projector lamp a series of colour prints that reveal the sequence of the peek-a-booing friend, her disappearing shoulder and a couple of close-ups of tree trunks.

Around the same time, Gerling, whose show has toured 16 countries and won an award at the Edinburgh Festival Fringe, got into long-distance walking. His first big walk was from his home in Berlin to Basel Switzerland, a distance of 1,300 kilometres. Walking led to more subjects for his flipbooks, as well as the concept of the travelling exhibition, which consists of Gerling walking his route bearing a large backpack and a tray strapped to his front. The flipbooks are arrayed on the tray for the curious, who are invited to flip through them.

As for the photographs themselves, they are nothing remarkable, but for the way the subjects respond to being snapped multiple times. As Gerling remarks, 12 seconds can be a long stretch. On stage, Gerling thumb flips his books under the projector three times each so we can notice the sometimes minute changes of pose on the big screen. A man who looks like the artist Christopher Pratt barely moves, but appears to give a small sigh. A mother and daughter confront the camera and then turn to each other. A shirtless boy in front of a canal outside Münster wipes his nose.

Some subjects get into the role with gusto; a woman at a bar pulls up her sweater to show us her breasts, daring the camera to keep shooting. Others try defiance. In one flipbook where the portrait of a man and a boy appears unchanged over 12 seconds, Gerling asks us to notice a moving blade of grass – proof that the sequence is authentic.

The walks introduced Gerling to some colourful characters, including an old widower he met on the road who took the photographer into his home. But Gerling is not a born storyteller and his sing-song delivery and awkward phrasing make one feel he’s merely making fun of this charming old German. When he found that by creating bigger time gaps between shots he released “power and poetry,” Gerling embarked on some epic projects: photographing a building over many hours so that the moon appears to fly across the sky; shooting a scene from his Berlin building over four seasons; or following the movements of men using the urinals in a public washroom over an evening. In some cases, like the woman who posed for seven and a half hours while a candle burned down, we grow weary with this work.

By the end of the 75-minute show we’ve seen enough, although Gerling does get laughs and maybe even some customers. Viewers are invited up on stage to see the flipbooks, priced at $30 each.

Volker Gerling with his travelling exhibition of flipbooks.  Photo by Susanne Schule