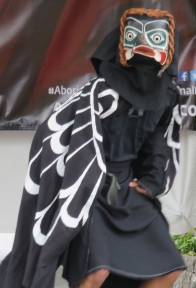 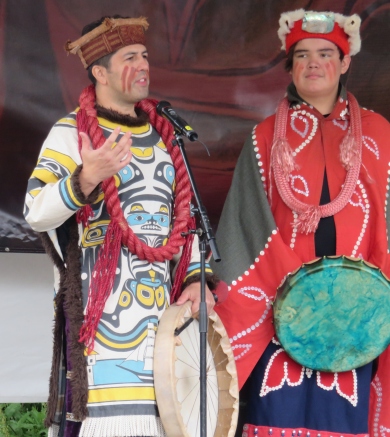 Every performance of the Le La La dancers repeats a form that goes back thousands of years. But it takes this Victoria company and its director George Me’las Taylor to make the Kwakwaka’wakw (kwa kwa key wok) songs and dances new again.

Taylor’s willingness to share his culture is powered by a prodigious talent. He’s a showman. He’s a singer and drummer and knows how to wear a mask and animate it.

Last Saturday on the stage of the Victoria Aboriginal Cultural Festival, Taylor, born in Alert Bay, B.C., was in full voice, singing, drumming and introducing the dances.

“We perform these dances,” he said, not just for spectacle, “but because they belong to us.”

He meant “belong” in both a cultural and a family sense. In the Kwakwaka’wakw tradition, a dance and the mask that identifies it is the property of a particular family, passed on by inheritance or marriage. That means at any occasion that demands a potlatch, such as a birth, death or marriage, the family members can enact the dances they own. Some dances are considered sacred and are witnessed only in the context of a potlatch.

Since I first saw them perform in Toronto in 2006, Le La La (it means travelling from here to there) has only grown stronger at a kind of storytelling that’s at once specific to the spiritualism of the Kwakwaka’wakw and universally understood. Taylor’s nation has inhabited the northern tip of Vancouver Island, nearby islands and coastal inlets for millennia. Two of George and Melanie Taylor’s sons, Jason, 32, and Jarid, 29, have always danced with Le La La. Today the company also includes nephews and grand-nephews and grandson Lason Taylor, who is 5 years old. Melanie is the company manager.

The Kwakwaka’wakw are renowned artists whose reputation extends back to the time of Contact and includes important carvers such as the late Mungo Martin and his grandson Chief Tony Hunt. The full intent of the masks is only revealed when they are danced. Introducing Wild Woman of the Woods or Dzunukwa, Taylor tells the story of a haunting character represented with a mask featuring a hook nose and big red lips. She’s known as a bringer of wealth, but like many a mythical creature she has a dark side. Children were warned not to wander into the woods in case Dzunukwa might be abroad. She likes to snatch up young ones and take them home to eat. A Le La La dancer in a fur suit, wearing the magnificent mask, bears a cedar bark basket on his back – all the better for carrying home small children.

Bukwus, the wild man of the woods, possesses great strength and can make himself invisible. One interpretation has it that Bukwus might offer food that a wise person would refuse, because it is Bukwus’ habit to consume the souls of the living. Bukwus might also be an aboriginal interpretation of Big Foot.

Le La La’s Bukwus enters the stage in an outfit that looks like moss; he is truly scary. The transformation dance is an opportunity to see how dancers really do take on the identity of the animals and spirits they depict. On Saturday, 18-year-old Calvin Charlie-Dawson performed this dance with great agility, surrounded as he transformed himself by dancers Ethan Taylor and Jarid Taylor, wearing button blankets.

As a director at large of the Aboriginal Tourism Association of British Columbia, George Taylor has an official role as an ambassador for first nations culture. And ever since establishing Le La La in 1987 he has been taking the message of friendship and unity around the world, from Europe, to China and Mexico and all points of the North American compass.

“My father always told me to be proud to be first nations, and I am proud. But I am also a proud Canadian,” Taylor tells his audience. He means it and he lives it. In fact he says it again.

Family, pride, love, respect, harmony and peace. These are the values that Le La La stands for.

See George Taylor at the prow of a canoe at the opening of Victoria’s aboriginal cultural festival: http://www.cheknews.ca/aboriginal-festival-kicks-off-traditional-canoe-landing-189217/

For more about the company go to www.lelaladancers.com