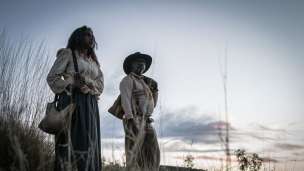 “How many have to die before you say, Enough? ENOUGH!” So says one of the Maori women in Waru, a film made in New Zealand by eight Maori female directors, each of whom contributed a 10-minute segment to a feature telling how a community comes together over the killing of a boy by his caregiver.

Tomorrow, Waru will open the 18th imagineNATIVE Film + Media Arts Festival, running from October 18 to 22 in different downtown Toronto locations. imagineNATIVE, now the largest festival of indigenous screen content in the world, is this year presenting 130 works, including 116 films and videos, five audio pieces and nine digital media works. Almost three-quarters of the works (72%) were made by women.

Powerful imagery about powerful women, Waru is composed of eight shorts, each made in one continuous shot that, strung together, tell the story from many points of view of a boy named Waru, revealing the pain of child abuse and looking to ways of healing.

The festival closer, screening Sunday at TIFF Bell Lightbox, is The Road Forward, a Canadian-made musical documentary created by Marie Clements, a Métis/Dene playwright and filmmaker from Vancouver. The National Film Board production is based on a stage show employing first nations singing and dancing to tell the story of protest and activism by indigenous peoples in Canada from the 1930s to the present.

Sweet Country, another searing feature from Down Under, is a western directed by Australian filmmaker Warwick Thornton. Set in 1929 in the Northern Territory, the movie is based on an actual event: the murder of a white rancher by an Aboriginal bushman acting in self-defence.

This year’s festival is an occasion to mark the 50th film made by Alanis Obamsawin, Our People Will be Healed. The Quebec filmmaker, whose works go back to 1971, when she made her first film with the NFB, Christmas in Moose Factory, has this time turned her lens on the Helen Betty Osborne Ininiw Education Resource Centre, a Cree school near Norway House, 800 kilometres north of Winnipeg. As the 85-year-old Obamsawin told reporters in September at the time of the Toronto International Film Festival, “if you want to start talking about (native) problems, start talking about them in a positive way.”

Indictment: The Crimes of Shelley Chartier, is a documentary from CBC Docs POV. “I was stupid, I was bored, I was lonely – that’s the truth,” Chartier tells the camera of her catfishing exploits. She relates how simple it was to impersonate celebrities and their fans online from her home in a remote reserve in Manitoba, Easterville. When an NBA superstar falls for Chartier’s online pose as a model who sends him nude photos of herself, the player is entrapped with the revelation the pictures were of a 17-year-old. Chartier’s extortion efforts took RCMP on a trail that led to the Playboy Mansion and other celebrity locales, before Chartier was indicted and sent to prison for 18 months.

Among the 102 short films screening at the festival are many directed by emerging indigenous filmmakers. Razelle Benally (Diné) is an alumna of the Sundance Film Institute Native Filmmakers Lab. Her 10-minute drama, Raven, screens in the shorts program Mother + Child. Beautifully shot, Raven is the wordless, heart-breaking story of a teenage suicide that derails at the last minute.

Terry Jones, a Seneca artist from the United States, has made untitled & unlabeled, a three-minute experimental documentary that uses a video-game format to tell the story of how as a small boy he learned just how “different” he was.

Inuit filmmakers Carol Kunnuk and Zacharias Kunuk are represented at the festival with the world premiere screening of “Bowhead Whale Hunting with My Ancestors,” the first episode of a seven-part television series, Hunting With My Ancestors.

The festival’s new headquarters at 401 Richmond Street West will be the site for much of the industry component of the festival, including the imagineNATIVE live pitch sessions, workshops and panel discussions on such topics as, “Breaking the Mould: Developing Indigenous Narrative Models.”

Friday night, starting at 5 pm at the Onsite Gallery, is the festival’s Art Crawl, a bus tour taking in shows and talks on contemporary indigenous art at seven gallery spaces.

Partnering with Hamburg’s A Wall is a Screen, the festival presents an urban walk at 7:30 on Friday from the Art Gallery of Ontario featuring shorts projected on various wall spaces.

Last but not least, imagineNATIVE presents The Beat, hosted by Jarrett Martineau at the Horseshoe Tavern on Saturday night, showcasing live performances by Mob Bounce, Kayla Briët, Ziibiwan and DJ Kookum and screenings of music videos.

Go to imaginenative.org for details and schedules