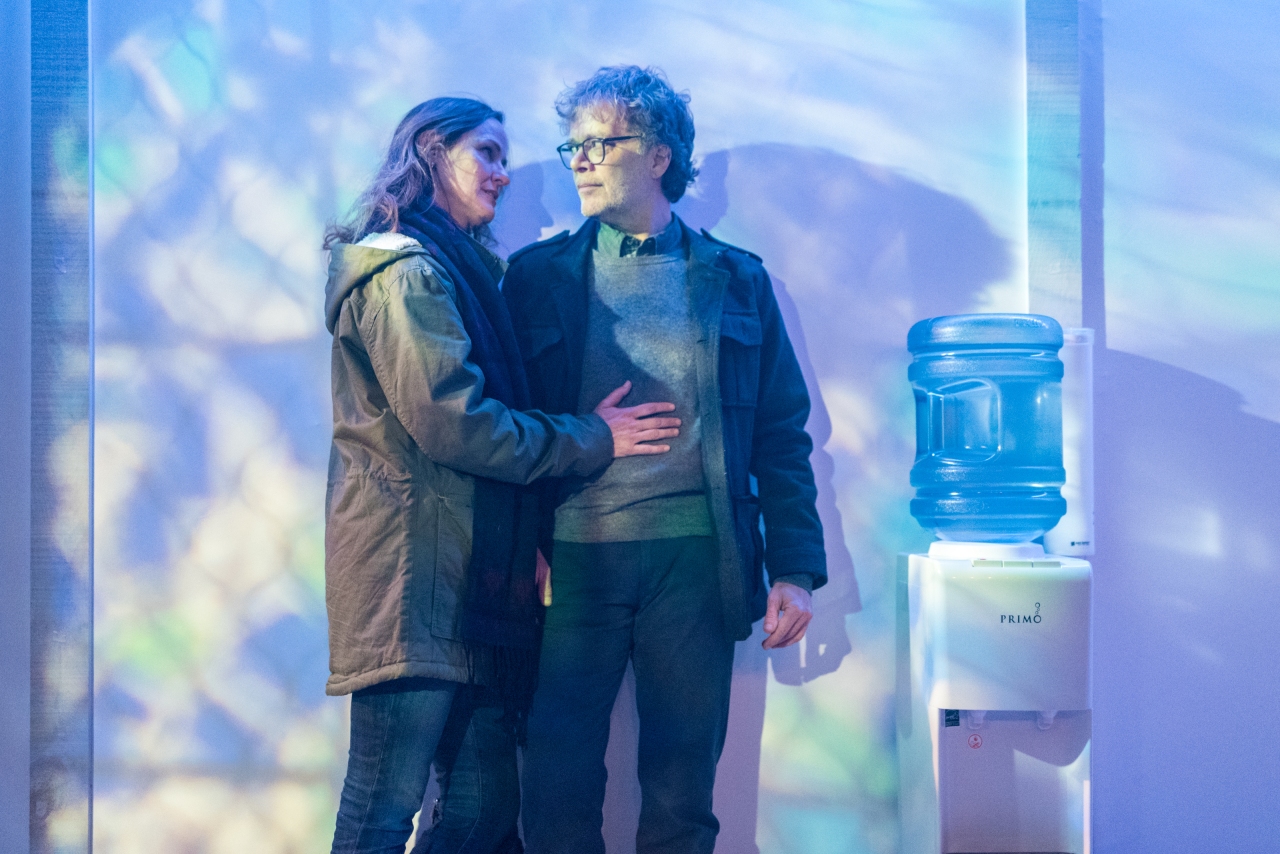 A woman and a man arrive, separately, in the reception room of a Dutch cemetery. They’ve been summoned to a meeting. The soil is contaminated and as many as 200 graves will have to be moved, including that of their loved one. This is the first time they have seen each other in 10 years – nine, argues the ex-husband – since the New Year’s Eve, Dec. 31, 1999 when he, bearing two suitcases, walked out the door of their home. He now lives in Normandy, France. And he has arrived for this meeting first. “You’re early,” she says upon entry. When it’s time to sit down, they leave lots of room between them.

Poison takes this couple a long way in 75 minutes and we go with them, moved, amused and finally wiser than when we came in.

Written by Dutch playwright Lot Vekemans, Poison has been a hit in Europe. Coal Mine Theatre commissioned Rina Vergano to write an English translation and the result is an intimate performance that seems tailor-made for the tiny stage at the storefront theatre on the Danforth.

We soon understand that the grave, now mired in a toxic “muck,” is that of the couple’s dead son Jacob. Slowly, painfully, the story of their marriage, their loss and their very separate griefs unspools.

Fiona Highet and Ted Dykstra make much of their roles, under the direction of Peter Pasyk. On a bare set with only a water cooler, four chairs and the occasional piano phrase or projection of a stained-glass window pane to slightly alter the mood, they engage in ways requiring a skilled actor’s attentiveness to space and gesture.

Exits and entries mark the changes in their stances toward each other, but those attitudes can shift within a few sentences. “You haven’t changed a bit,” he says once she’s arrived. “Don’t look too closely,” she fires back, with a wry grin. It’s downhill from there. The awkward silences, the small talk, the polite inquiries,  devolve into a shouting match, as they hurl at each other the toxic words both know can wound. “Everything was always your drama,” he barks, accusing her of wallowing in her grief. “You’re pathetic . .  . heartless,” she says, levelling her worst at her journalist ex.

The brilliance of Poison is in the expression of profound grief and emotional epiphanies through everyday language and ordinary images used poetically. It’s not the remembering but the way they remember that determines the movement in the play. Her smile, which brought out a dimple, is how he’s preserved his wife. She recalls only the back of him as he went out the door.

A repeated phrase, “so this is it?” marks the moments when things start to change.

Memory is a thread that runs through this play. People can hang on to pain and it is always fresh in their recollection of it. But holding on to positive memories serves a different function.

Dykstra and Highet, on the wings of a wonderful script, take us to unexpected places and a realization that you really do only have this now, this moment, to make the most of whatever life has dealt you.

Set and lighting by Patrick Lavender

Produced by Coal Mine Theatre, Toronto, running through December 3

Photo of Fiona Highet and Ted Dykstra by Dahlia Katz