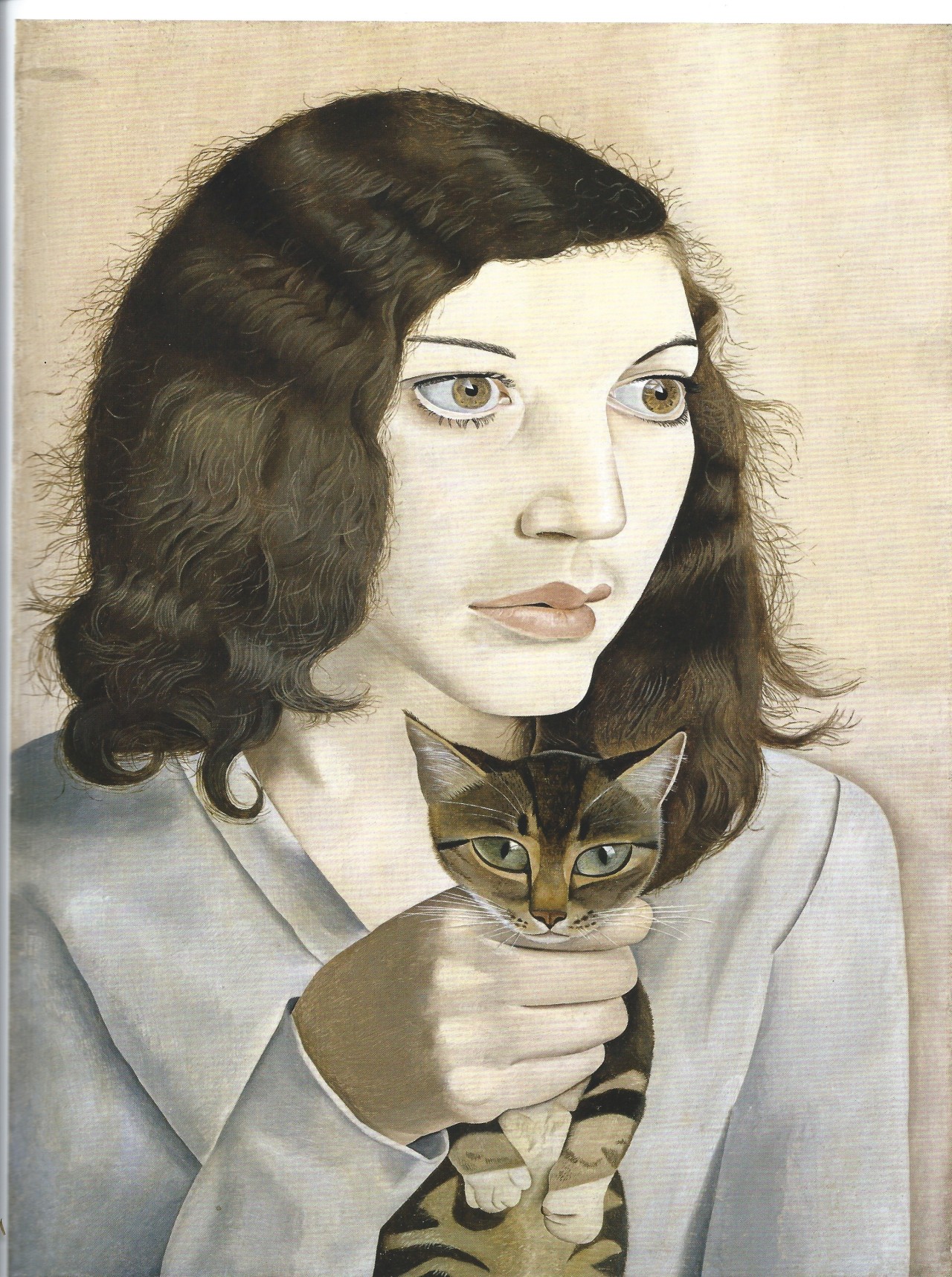 Bacon Freud The London School/La Scuola di Londra, on until 23 February 2020 at Chiostro del Bramante in a quiet corner of Rome, is an arresting show that puts artists Francis Bacon, Lucian Freud and their London contemporaries into a context that deepens our understanding of their art and their times.

Take Girl with a Kitten, a small 1947 oil painting by Lucian Freud that is the first work seen in the show. The picture is surprising enough in itself, a wide-eyed young woman, staring into the distance, gripping a kitten by its neck, as if about to strangle it. Girl with a Kitten is one of eight portraits Freud painted of his first wife Kathleen Garman, daughter of the sculptor Jacob Epstein. What curator Elena Crippa of the Tate in London saw in this portrait forms the premise for the exhibition. The art of the London School reflects the anxiety and despair that still gripped Londoners after war’s end, amid the rubble, burnout remains of buildings and melted windows left after the Germans’ Blitz of the city.

The young woman’s blank expression tells us nothing, but the grip on the kitten’s neck bespeaks an existential dread that was the common experience of those years in the city. The London gang, as they were sometimes called, comprised Francis Bacon, driven by his family out of Ireland to settle in London; Lucian Freud, forced out of Berlin by the Nazi takeover; Frank Auerbach, also a refugee from Nazi Germany; Michael Andrews, Norwegian-born and a student of Freud’s; Leon Kossoff, born in London to Russian-Jewish immigrants; and Paula Rego, sent from Lisbon at the age of 16 to complete her education at the Slade School of Art. Auerbach and Rego both live and work in London to this day.

Crippa’s essay for the show is titled “The Tactile at the Limits of the Visible” and her theme is elucidated in the pictures she selected for this show. Bacon (1909-1992), we learn, was self-taught and seemingly a creature of chaos. In his rag-and-paint-filled studio, he would assail an unprimed canvas, mixing his colours on his bare arm. In a painting such as the 1952 Study for a Portrait, done in oil paint and sand, it is not the man’s figure but his open mouth and the intense emotion it expresses that is the subject. Bacon’s aim was to mount an assault on the nervous system, in the way he depicted his subjects.

“I never visualise a picture before I start,” Frank Auerbach once said. “I have an impulse, and I try to find a form for that impulse.” Auerbach drew and painted the same scenes and figures and over again, as one sees in Head of E.O.W. (1959-60), a portrait in charcoal and watercolour paint on paper of Estella Olive West, an actor with whom he had a long relationship. He worked it and erased and reworked it to the point where the paper ripped and he had to apply a patch, that sits on Stella’s forehead. The brooding, painful quality exuded by this picture is a function of the way it was executed.

Melanie and Me Swimming (1978-79), a Michael Andrews acrylic painting has the same kind of physical unreality as Bacon’s portraits often display. The father and the daughter seems suspended in a black surround, that represents the pool, but more clearly conveys the vulnerability of child and the anxiety surrounding the possibility of a drowning. Andrews, who died in 1995, was focused on the relationship between humans and nature and revealing subconscious feelings and motives.

Of all the artists in the show – they were friends who gathered in the same bars and clubs of London—Leon Kossoff (1926-2019) seemed to enjoy the most conventional life. London became his subject from an early age, and his vigorously limned drawings of Christ Church, Spitalfields reveal the energy stimulated by observation of his environment. He too worked scenes such as Children’s Swimming Pool, Autumn Afternoon (1971) over and over, building up layers of oil paint until the paintings worked in three dimensions.

Paula Rego, born in 1935, exhibited work with the London gang in the 1950s. The edginess and fairy-tale quality to her work haunts the viewer. In a 1988 acrylic painting, The Dance, a young woman in folk costume seems to be dancing alone on the edge of a dance floor where couples and a trio are stepping out. But the scene takes place on a moonlit beach, a dream landscape that begs the question, Who is that woman and what story does she embody?

“I want paint to work as flesh,” Lucian Freud (1922-2011) declared. Three of his pictures in this show, David and Eli, Leigh Bowery and Standing by the Rags, do just that. A wordless short film by Enrico Artale that acts as a commentary on the exhibition, reinforcing the notion that these artists of the London school managed to do with paint and pencil what composers do with musical instruments: express the profound aspects of the human experience that course beneath the skin.

2 thoughts on “When in Rome, see this show”