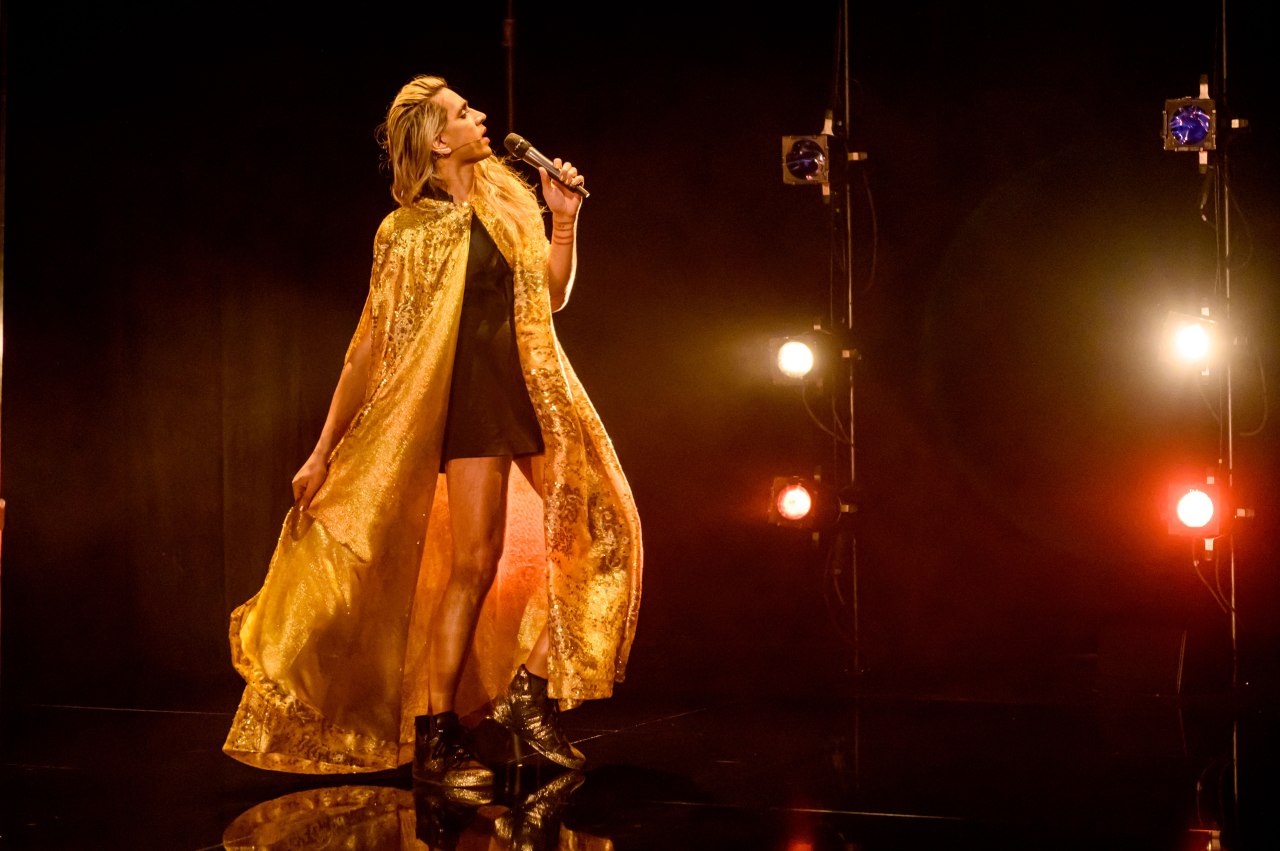 Vivek Shraya makes a convincing case for How to Fail as a Popstar. But she’s a success in the “I Did It My Way” mold. On the evidence of this show, Shraya is a terrific writer and performer, with a great voice and a gift for mimicry.

Popstar, a world premiere at Berkeley Street Theatre, was written by the self-described queer, trans, brown performer. And Shraya made it as an author, with the bestselling I’m Afraid of Men.

A straightforward tale of failed dreams, this one-woman show is spiked with satire, jokes and laugh-out-loud impersonations of the people in the Canadian music industry who helped Shraya along on her way to failure. And songs, which she performs in period moves choreographed by William Yong.

Covering all the gender bases, she enters in a full-length spangly gold cape over a black shorts jumpsuit, in glittering black high-tops and sparkling eye shadow to set off her abundant long blond hair; we don’t miss the chest hair peeking through her V-neck top. “I did not become God. I never got to perform with Madonna,” she says in reference to her youthful ambitions.

It’s a long story. Vivek, the son of Indian immigrants, grew up and went to school in Edmonton. He was teased, called faggot. He was geeky. But he had his own style, which girls at his junior high school approved of — and a voice. “You were chosen,” Vivek remembers thinking at services in the Sai Baba Temple. “I could feel my own divinity.” To demonstrate, she sits cross-legged on the stage and sings a bhajan, one of the hundreds he/she learned at the temple.

In the section entitled “The Judge”, Shraya gets a lot of laughs with her portrayal of Edmonton as a city of malls. The Youth Talent Quest, which she finally won at 19, wound up in the West Edmonton mall in the biggest food court. Vivek’s win, after many tries, was for a song of her own, “Madrid.” The judges, most of them older women in “floral blouses with shoulder pads,” had a suggestion. “Have you ever considered wearing leather pants like Ricky Martin?”

Eventually, Shraya gets the break she needs to “get the fuck out of Edmonton” and with a $20,000 loan, guaranteed by her parents, starts recording her songs with a Toronto manager. Her temporary housing was in the apartment of an assistant to the manager who calls herself Mama Carla. “I should have done my research,” Shraya tells us. Mama Carla’s luxury apartment turns out to be in Mississauga and every time the budding popstar starts asking questions about his progress, Mama Carla demands a backrub.

There is much more delight, honesty and poignancy. Defeated by the Toronto music scene, Vivek decided she was going back to Edmonton. Vivek’s mother was so accepting she asked her son if he was sure he has finished what he must do in Toronto.

The end of the show is a recitation of forty reasons why Vivek failed as a pop star. “Number one: I was born in Edmonton . . .”

Failure is relative. Shraya actually reached a stepping-stone to musical success with a Polaris prize nomination for an album made with Queer Songbook Orchestra: Part-Time Woman. And she needn’t worry about failure from here on in.

How to Fail as a Popstar

Written and performed by Vivek Shraya