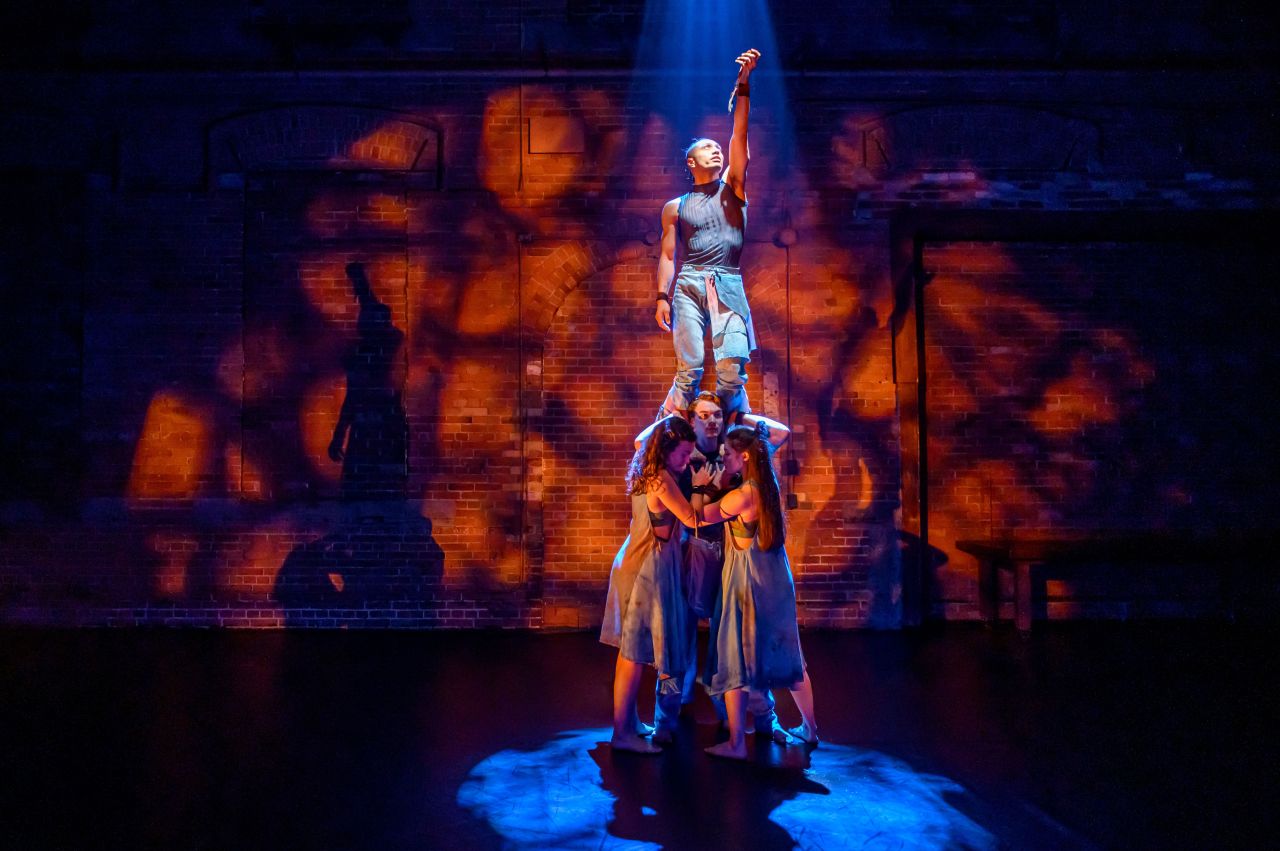 If you want to see some terrific contemporary dancing, set to an amazing score by Eliot Britton and Rick Sacks and performed live on stage, get down to the Berkeley Street Theatre to see the latest Red Sky production, AF.

Billed as “seven movements of contemporary dance and compelling physical storytelling,” AF is a show that grew out of Red Sky’s residency in the Berkeley Street Company. The initials are taken from Animal Farm, George Orwell’s allegorical novella of 1945 that depicted a rebellion among farm animals seeking freedom from their farmer overlord. It does not end well.

According to Red Sky artistic director Sandra Laronde, rather than recapitulating the dark path of Animal Farm, this show, choreographed by Thomas Fonua, took its lead from the more triumphant Anishinaabe mythology, specifically the eight fire prophecies.

The Anishinaabe fires correspond with epochs in the history of Turtle Island (i.e., the world), each fire a prophecy. The fourth fire, for instance, foretold the coming of a light-skinned people. The seventh fire, as explained on the website crystalwind.ca, was delivered by a young, clear-eyed prophet. The seventh fire was to lead to the rebirth of the Anishinaabe nation. The eighth and final fire will be an eternal flame signifying, “peace, love, brotherhood and sisterhood.”

None of this information is available to the audience, so the dancers have a daunting task – to explain in mime and movement what’s going on. What’s more, the wonderful voiceover from Anishinaabe speaker Albert Owl, is nowhere translated. It would have been a simple matter, given Chris Malkowski’s clever lighting design, to project surtitles on the brick wall that forms the back of the stage.

Story-wise, AF takes a while to find its feet. In a cone of light, a tall figure of powerful mien, with long hair and a cloth draped over his jeans, opens the show. In front of him in darkness is a long table and all we can make out are four heads. When the lights come on over the table, we see it a supine male, leaned over by two women dressed in flowing blue dresses, their hands clawing at the supine figure’s legs, their heads shaking rapidly back and forth, somehow in synch with the rhythm of the music and drumming to the right of them on stage.

Even those ignorant of the mythology will catch the meaning of the fourth or fifth movement, when a mottled circle of light slowly encloses the dancers in a tight formation. The paleskins take over the land and put the Anishinaabe on reserves.

The tall, warrior-like character might be interpreted as delivering the eighth prophecy, as flames (a trick of lighting) lick around the dancers: Eddie Elliot, Michael Rourke, Miyeko Ferguson, Marrin Jessome and Connor Mitten.

Fonua’s contemporary moves are pretty standard, but as barrel rolls flow into floor crawls or leaps and push-pull partnering, it’s hard to see any aspect of Animal Farm – or any necessity for it.

Yes, the dancers do a lot of sideways, forward and backward moves on all fours and sometimes there are farm animal sounds, but what you notice are the birds’ cries, blending with a soundtrack of recordings from Gabe Gaudet, Marie Gaudet, Nelson Tagoona, Tanya Tagaq and a Tribe Called Red. Jenifer Brousseau’s live singing and keening, invoking the spirits, takes precedence. The problematic dance language is in repeated poses with heads down and faces unseen, always suggesting submission. Problematic, because this is a hopeful, upbeat show and we need to know that before the final upright, towering formation.

Direction and concept by Sandra Laronde

Photo from AF by Dahlia Katz