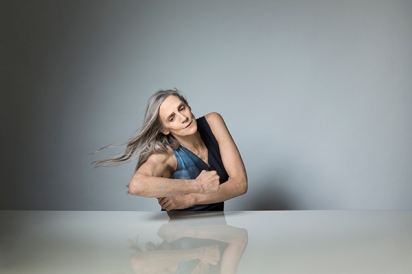 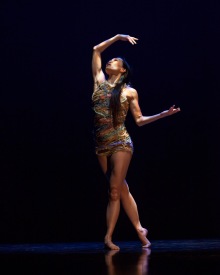 Map by Years is a feast for Toronto dance fans. Peggy Baker has assembled an all-star cast of dancers, choreographers, musicians and designers to present three of her stellar pieces from the past and to perform herself in a solo dance story created with Sarah Chase.

The outline of windows on the rear wall of the Theatre Centre space turn it into a salon, an intimate private space to experience virtuosity.

Jessica Runge is a wonder in “Her Heart,” a piece Baker made on herself in 1993 and revised in 2005. It is one of the earlier instances in which Baker performed with a live musician, choreographing both performers.

Here pianist Cheryl Duvall plays the four sections of the Johannes Brahms Intermezzo in tandem with Runge, who appears to ride the music. The music is in her, leading her, as it is in pianist Duvall. Runge, with her incredible fluidity, wearing the blue velvet long A-line dress designed by Caroline O’Brien, makes “Her Heart” her own, leaving with a look of peace and hope, as if she were giving us a piece of her heart.

Andrea Nann, another of Baker’s well chosen legacy dancers, revives “Krishna’s Mouth” (2003) in her inimitable style. The lines of the narrative are choreographed to repeat as Nann (Natasha Bakht performs on alternate nights) speaks/dances and cellist Anne Bourne keens and plays Karen Tanaka’s “Song of Songs.” As a child, Krishna the Hindu god of compassion and love, puts a clot of earth into his mouth. When his mother investigates she “sees the entire universe in her baby’s mouth.” Nann, hair braided in a long pigtail, wears a translucent tunic over top and square-cut pants and engages in very geometric moves, sweeping across the stage, crouching low, lying down and rising up, the energy driving her from her core. Musician and dancer are balanced; both are a vehicle for expression of the music. Acoustics may need some adjustment as there are moments when the women’s voices and the music overwhelm each other.

Baker created the silent solo “Portal” (2008) with lighting designer Marc Parent. Kate Holden (Mairi Greig on alternate nights) embodies Baker’s notes: “I was forced to consider the edges of time and space at the brink of death.” Holden appears in a cone of light that makes a lit square just big enough to accommodate the performer. She wears an expression of sadness, almost defeat. But the dance defies death, the movement and the breath making all the necessary music. The stage goes black and Holden reappears in a new space of light, bare arms windmilling, each half of her body appearing to act independently of the other, strong and under control.

“Portal” makes a natural transition to “unmoored,” Baker’s second creation with Sarah Chase. The two first made “The Disappearance of Right and Left” in 2003, based on 102 stories Chase asked Baker to write, two for each year of her life up until then. But Baker omitted an important tale, that of her marriage to musician and composer Ahmed Hassan. Last year she came back to Chase, ready to tell that story.

Out of 30 pages of Baker’s writing, done in a room near the Mediterranean in Bogliasco, Italy, Chase has shaped a performance that Baker speaks, sometimes reading, sometimes reciting, raw in its emotions and polished in its performance. Two chairs, a table and a music stand make three stations among which she moves. What we see in our mind’s eye are the rooms Baker describes, from apartment to nursing home to hospital, where her long-time husband died, age 55, after living with multiple sclerosis for many years.

There’s a principle, it seems, fundamental to all choreography – you can see it in ballet, in bharatnatyam  and in modern dance – that makes the spine the centre from which all else moves. In Baker’s work, this full-frontal first position is often seen; as if her spine, running through neck and torso, were the driveshaft for the movement.

In black shirt, belted black jeans and low-heeled boots, Baker faces us, very erect, then moves through her story extending her arms to give it to us, accompanied by the vocals of singer Maryem Hassan Tollar, Ahmed Hassan’s sister. Everyone is moved, including the dancer.

As an artist Baker needed to make this dance story, for it marks the renewal of creativity, going forward with undying love on the wings of a poem by Rumi.

At the Theatre Centre, Toronto, through February 25