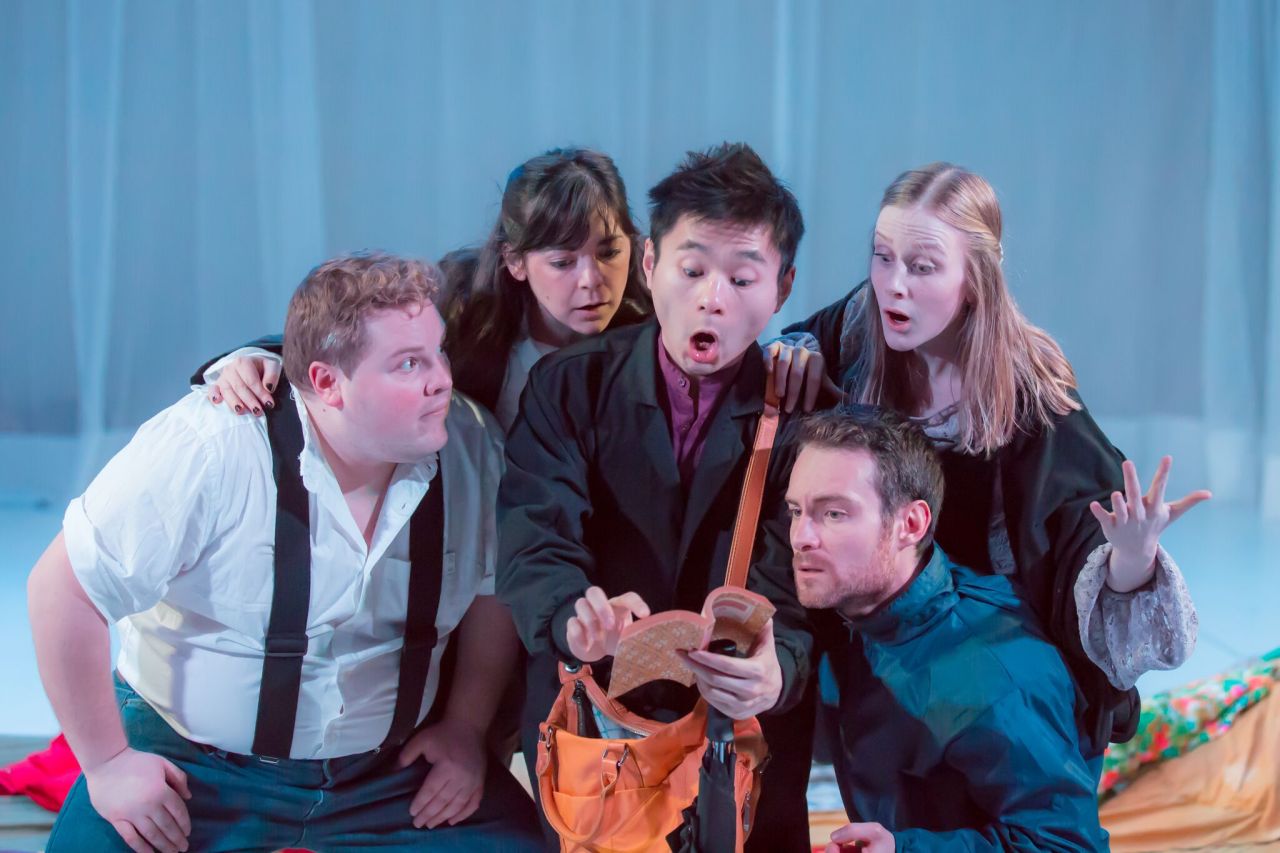 A barefoot Midsummer Night’s Dream from the Chekhov Collective is more akin to dance and performance art than to conventional theatre. But this show’s cast, adept at physical expression, are also well-trained in Elizabethan utterance and wring new meaning from the comedy’s lines.

What they achieve is a rollicking, laugh-out-loud funny version of the play that exploits the sly humour in Shakespeare’s spoof of the acting world and the mix of magic, make-believe and nonsense that is A Midsummer Night’s Dream.

Lines drawn from a speech by Theseus, the Athenian duke, about lovers, fantasies and madmen are given to actor Natasha Greenblatt to introduce the play: “The lunatic, the lover, and the poet / Are of imagination all compact.” In other words, we’re going to see where our imaginations can take us in mounting a play with the barest of props, costumes and set design amid a soundscape of vaguely Celtic period music.

Director Richard Sheridan Willis makes a comic virtue of the necessity to double up on roles, with a cross-dressing cast of seven making a multitude. Only Zach Counsil, a scenery-chewing Bottom, gets a single role, and he has three parts to play in it.

Welsh-born actor Paul Amos is Theseus, affianced to the noblewoman Hippolyta, performed by Rena Polley. As the play opens, he is trying to sort out a trio of lovers, to the satisfaction of Egeus, another nobleman, who is asking the duke to intervene in the matter of his daughter Hermia, who is smitten with Lysander. Egeus, played by Elizabeth Saunders wearing a man’s overcoat, is determined that Hermia should marry Demetrius, whom Hermia loathes. Greenblatt’s Hermia, looking teenaged in jeans and white blouse, is feisty in love; she conspires with Lysander (Jesse Nerenberg in a young professional’s white shirt and blue/green tie) to meet at night in the forest, from whence they will run off to his dowager aunt’s and marry.

Demetrius (Michael Man) is meanwhile the object of unwanted affection from Helena, played by Christina Fox, an obvious beauty in a lacy, frumpy dress who speaks oxymoronically of her own lack of appeal. Helena overhears Lysander and Hermia’s plans and vows revenge by sending Demetrius into the wood to chase down Hermia before she makes off with Lysander.

Enter Peter Quince and his band of players, tradesmen who will perform the story of “Pyramus and Thisby” as entertainment for the Theseus/Hippolyta nuptials. Michael Man, the benighted Demetrius, is now the smug, smiling Quince, with his satchel primly held by a strap across his chest – reducing one to helpless giggles every time he comes on with his scruffy band. Greenblatt is Snug, the tinker. Quince is constantly interrupted by Nick Bottom, the weaver, who feels he’s the last word in showmanship. “If I do it, let the audience look to their eyes; I will move storms, I will condole in some measure,” he says of his intentions for playing Pyramus. Remaining quick-change artists are Nerenberg as Francis Flute, the bellows mender who will be Thisby; Fox as Robin Starveling, who gets to be the wall, holding up too fingers as the chink between which the lovers whisper to each other.

Much brisk stage business takes place as players under bobbing lights like stars or fireflies  move in and out through gauzy curtains that make a scrim.

A long green patchwork, velvety throw with pillowy knolls rolls out from behind the curtains to serve as the wood where the fairy king Oberon (Amos with a mossy stole over his black suit jacket) rules with Titania (Polley in a spangled gown). A nimble, shape-shifting Saunders is Oberon’s eager fairy assistant Puck, charged with bewitching, by herbal means, Titania to fall in love with Bottom, now transformed into a braying ass. Puck is assigned too to drug Demetrius so he falls in love with Helena, but gets it wrong, so that both Athenians are now entranced with Helena and Hermia becomes the rejected one. All this is accomplished with a sleight-of-hand tossing about of miniature red lights that spring from their fingers.

The minutes whiz past in this Shakespearean, clownish romp. Minimalist in its set design, but rococo in its acting and physical comedy, this Dream is a dream.

Presented by The Chekhov Collective

At The Citadel, Toronto, through March 11

One thought on “A dancey, entrancing Dream”