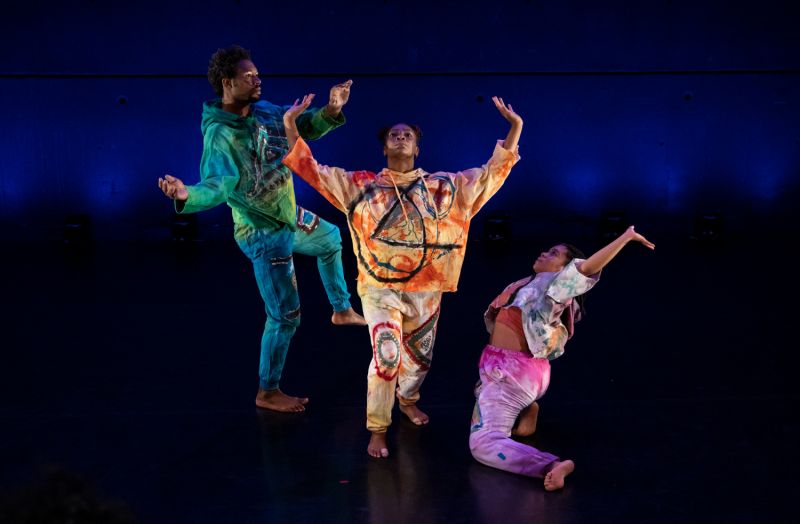 American dancer/choreographer Kyle Marshall gives us a taste of what it will be like to see dance live in a theatre once again in Stellar, a production streaming on the digital platform of the Baryshnikov Arts Center in New York City until June 21.

“A feeling of being in space,” that is, weightless, was a starting point for Marshall who worked through improvisation to create Stellar with his fellow performers.

Watching Stellar makes one a witness to creation in progress. In the best contemporary dance tradition, the dancers provide the movements; the viewer interprets the body language.

As the lights come up, Marshall, Bree Breeden and Ariana Speight emerge out of darkness, costumed in tie-dyed hoodies and loose pants. They might be out in space, so light do they appear. Sound designer Kwami Winfield, on stage playing and working the control board to convey interstellar sounds, makes a fourth performer.

An opening single note, as if played on a saxophone or trumpet, sounds over the dancers as they gradually form an orbit on the black box stage. The trio is walking, then running, skipping, striding with little hops or taking steps common to social dancing.

Marshall calls Stellar a work of speculative fiction, the music inspired by John Coltrane and American jazz performer and composer Sun Ra. The loose baggy costumes designed by Malcolm-x Betts are colourful and evoke the ‘60s era of Sun Ra’s Arkestra. There is lots of play, but strength and confidence in the solo moments especially.

Winfield plays with a string of shells that make a sea sound as Marshall, Breeden and Speight start to dance together in a loose pas de trois. The thing about the central form this dance takes – the circle – is that there is no leader in a circle formation.

Soon hands and feet make the rhythms a one-two-three-four beat that seems to take over from the music until Winfield comes back with live drumming that is synched to the claps and foot-stomping.

The camera affords advantages in not only directing our gaze, but allowing for multiplication and overlapping of imagery so that at points three dancers become six.

This dance is short and open-ended, perhaps to be continued when we can all sit together in a theatre once more.