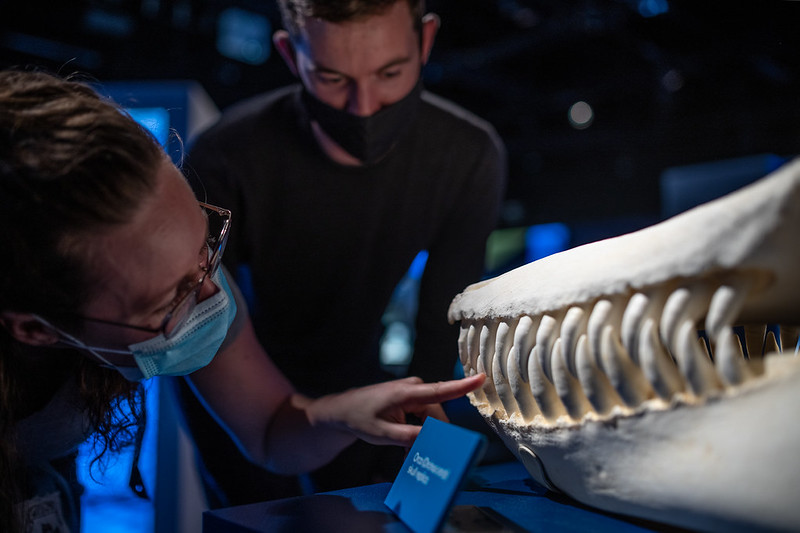 We were walking along a trail by Becher Bay in Sooke, BC when my friend got a glimpse of something rising out of the waves. I looked out and there it was again, arching and then straight up – a huge dorsal fin, signifying a male orca cruising the local waters.

Such sights are common around Victoria, where whale-watching is a popular tourist attraction. I remember when I was a student on a walk to a high point in Saanich seeing under the water the backs of three orcas swimming Haro Strait.

That first viewing is always magical. No wonder indigenous peoples identified closely with the creature we used to call a killer whale. The Kwaguilth believed orcas embodied the spirits of great chiefs.

Once a captive source of entertainment in outdoor aquariums, orcas have long been studied, but many questions remain. This much is clear in the exhibit Orcas: Our Shared Future at the Royal BC Museum in Victoria.

Prompted by a tragic occurrence in 2018 when Talequah (J35), a female orca, travelled the Salish Sea bearing up her stillborn calf, museum curators have mounted a show that would encompass the pressing question of how to save the Southern Resident pod of orcas that have been so threatened by shipping traffic, commercial fishing and just plain habitat deterioration.

Starting with the sensible premise, that all living things on a threatened planet have a shared future, museum staff assembled life-size replicas of orcas, a video loop recreating an underwater environment, artefacts, art objects and interactive displays, such as a video demonstration of how underwater noises impact the sensitive sonar systems of these very advanced creatures.

More than a dozen distinct types of orcas – from the toothed family of whales known as cetaceans – are found in colder waters around the world. On the northwest coast of North America, the fish eaters are Resident whales. The mammal-eating orcas are Transients or Bigg’s whales. Rarely seen orcas that occupy the open ocean and mainly eat sharks are known as Offshores.

Among the many surprising facts to learn about whales is their prehistoric origin; billions of years ago, they were land creatures that plunged into the oceans and evolved over eons into the biggest marine mammals we know today.

The Residents that live around the southern tip of Vancouver Island live in pods, the mothers and calves travelling together, and are individually known to marine researchers by their markings — such as the underside white saddlepatch, or a notch out of a fin. Canadian scientist Michael Bigg created the identification system using a letter for each pod and a number attached to each individual animal. The three distinct Southern Resident pods are J, K and L. Whales get names too: Luna / Tsu’xiit (L98) was a playful young orca who got separated from his pod in 2006. Efforts were made to return him to his mates, but Luna became a casualty after he swam into the propeller of a tugboat.

Taxonomically speaking, orcas, like humans, are apex predators, at the top of the food chain. They have language too; anyone who has whale watched up in the Broughton Archipelago has listened to the conversations captured on underwater microphones. Scientists have tracked different orca dialects attached to different pods.

Equally thrilling is the art that has emerged from Salish, Haida and Kwaguilth carvers commemorating the killer whale. Artifacts from the museum’s collections, such as ceremonial bowls and masks, are on display. Particularly revealing is a video of Richard Hunt showing how he carves a whale mask with moving parts manipulated by a dancer to make a swimming motion.

In a room near the end, visitors are invited to get engaged in saving the orcas, having viewed photos and graphs of marine decimation the world over, through strangulation from fishing nets, overfishing of whale food and human degradation of our oceans.

Orcas: Our Shared Future runs at the Royal BC Museum through January 9, 2022